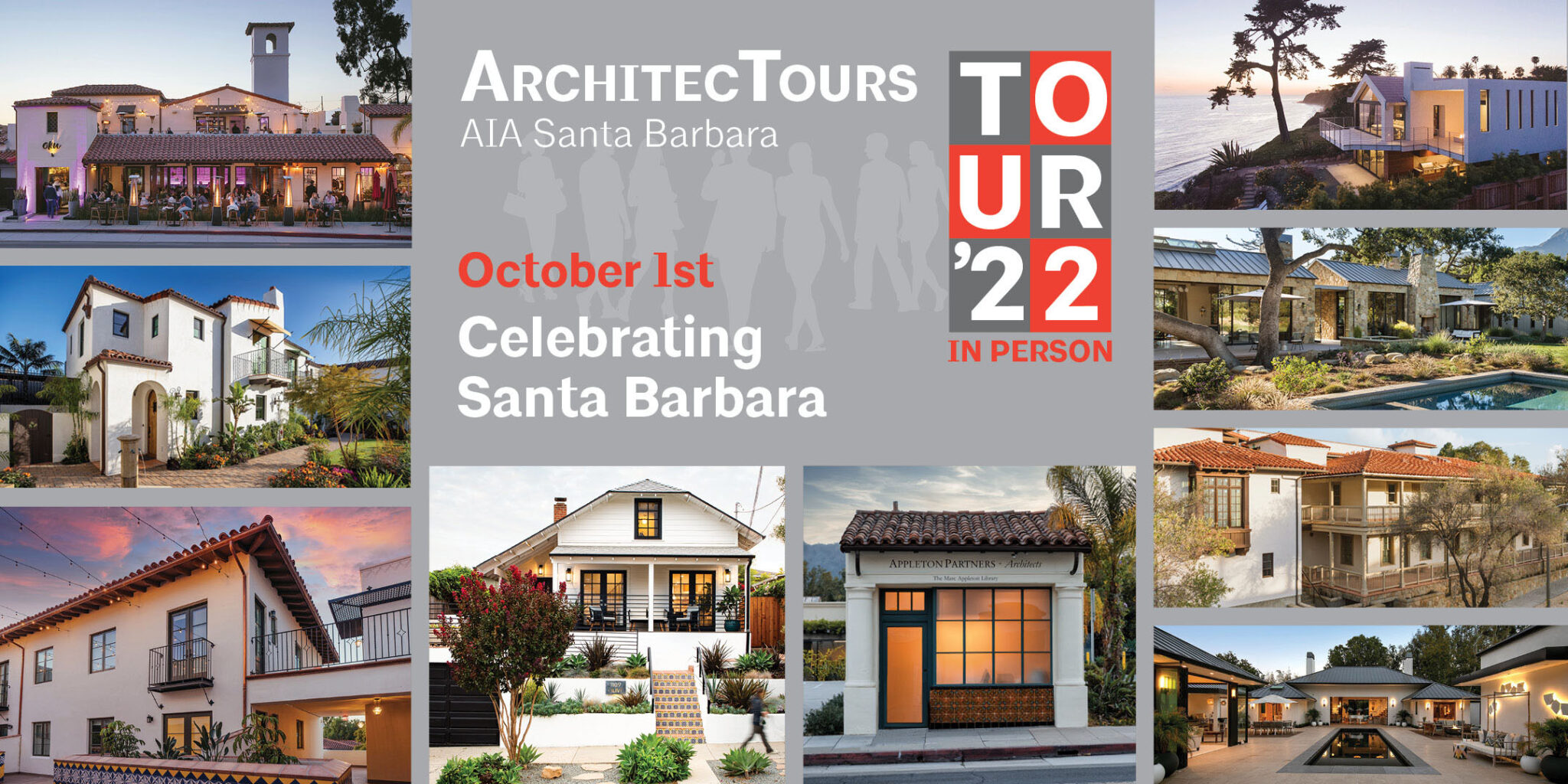 The American Institute of Architects Santa Barbara is proud to announce their 13th annual ArchitecTours event will be held in-person on October 1, 2022. This year’s tour will “Celebrate Santa Barbara” and will show the best of what it means to be a Santa Barbarian living amidst the mountains or soaking up the sun at the beach. Projects will range from commercial buildings to residences, as we explore the diverse experiences of living in Santa Barbara.
Our annual ArchitecTours is our biggest event of the year.  Join us on a self-guided tour of the best architectural projects in Santa Barbara.  You will receive a tour brochure and/ or app with maps, photos and info detailing all the projects. Meet architects and design professionals at each site, and learn how design affects our daily lives.
The projects on the tour this year include several unique residences; a contemporary cliffside home on The Mesa, a renovated modern farmhouse in Downtown Santa Barbara and two homes in Montecito that share a strong relationship with their natural surroundings. Also, on the tour are several historic building renovations including the former Hollister Family Office building and adobe.  Additionally, tour goers will also have the chance to visit two new multi-family housing buildings downtown that offer a range of unit sizes and amenities. 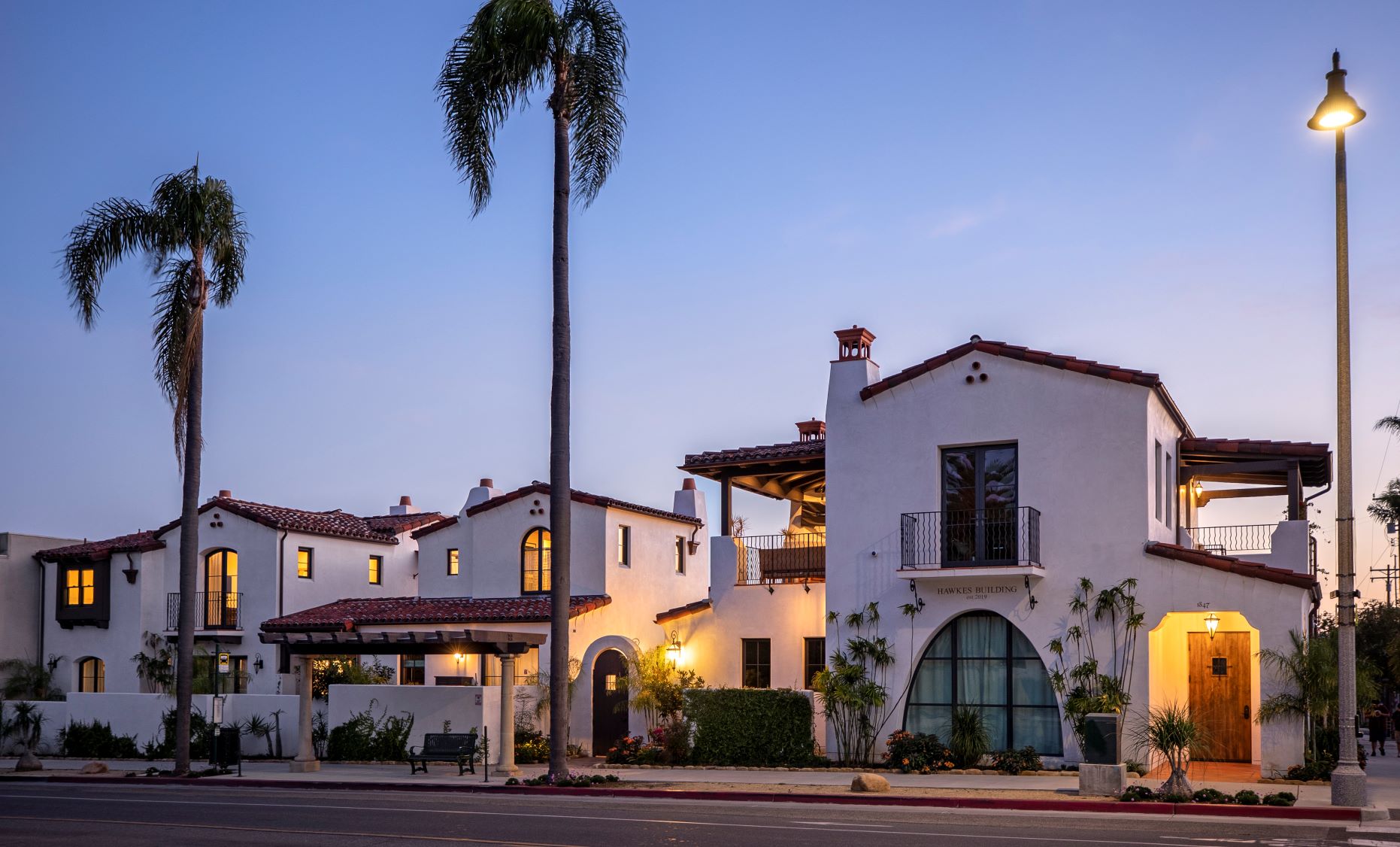 State & Pedregosa
Architect: Thomas Ochsner Architect
Photographer: Jim Bartsch
Located at the southwest corner of State Street and Pedregosa, this .4 acre lot was once a gas station. The owners waited almost twenty years for the passive soil contamination to reach a level appropriate for development. Representing the north entrance of the El Pueblo Viejo district, the desire to embrace Santa Barbara’s Spanish colonial heritage style was important.
The project is a mixture of residential duplexes and a small commercial building. 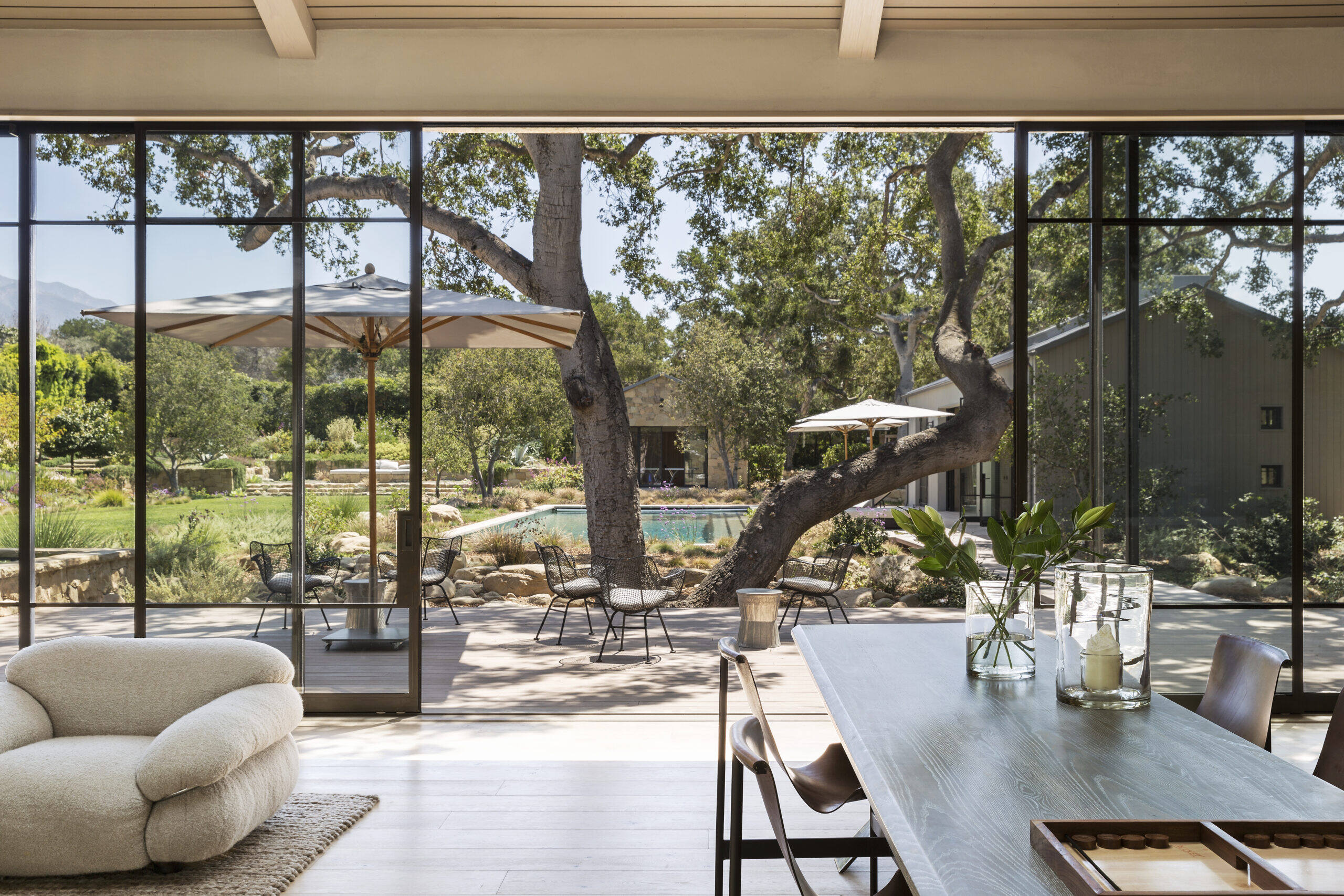 Romero Canyon
Architect: Studio William Hefner
Photographer: Laura Hull
This single-family residence sits about two miles from the coastline in Montecito, California. Organized around a large central courtyard with a pool, the compound’s four structures include a single-story residence, a pool cabana, a recreational structure and a two-car garage. The buildings are carefully sited around several large existing oak trees and oriented to take advantage of sweeping views of the Santa Ynez Mountains. 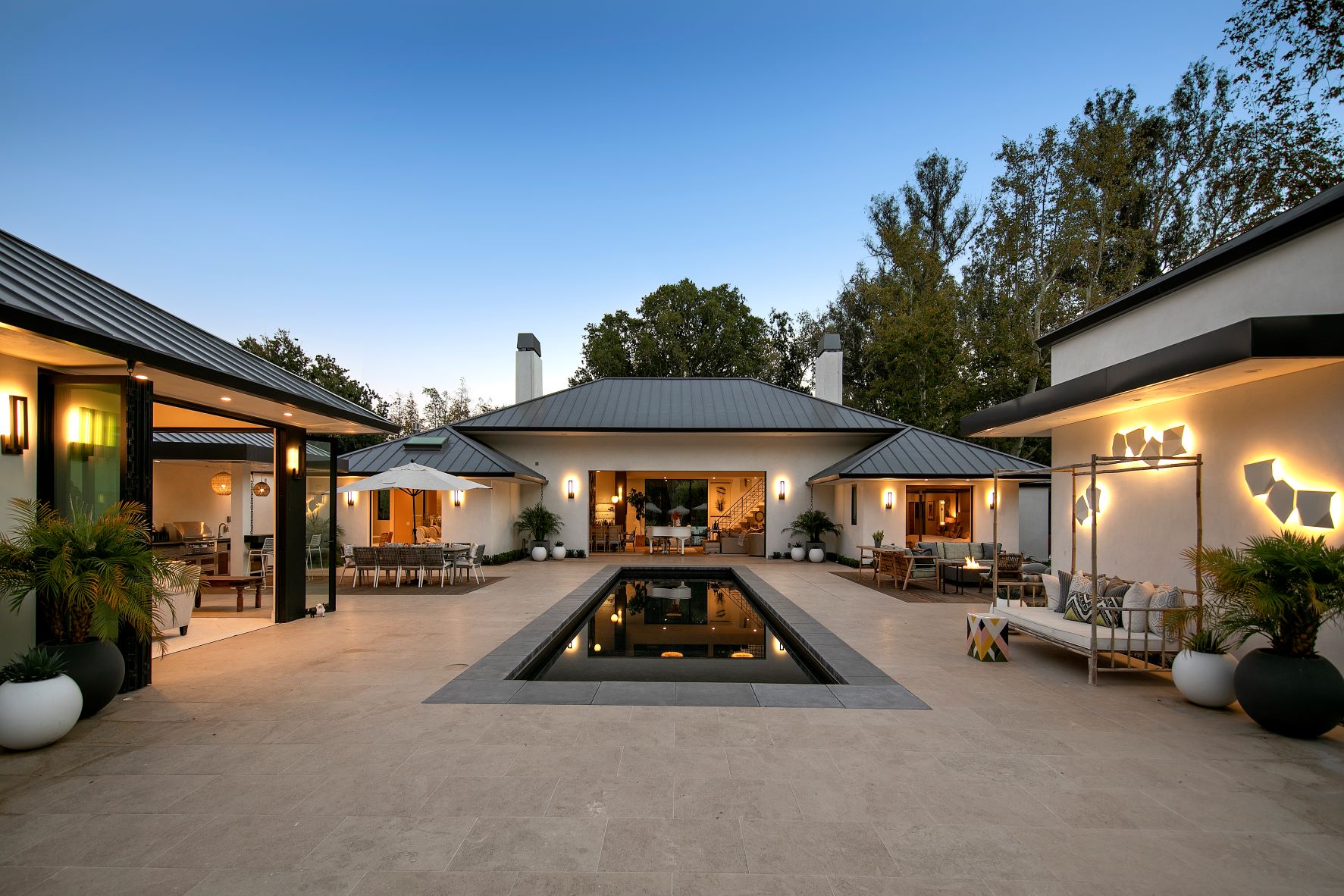 Pepper Lane
Architect: Thomas Ochsner Architect
Photographer: Jim Bartsch
Designed to bring the outside in, this residence was under construction for a major remodel when the Montecito mud flow nearly destroyed it. The residence was originally constructed in 1978 as a modest 3 bedroom French influenced contemporary. The new design reconfigured the dated architectural forms and compartmentalized floor plan into open interior spaces that seamlessly flow to the outside. This included creating one level throughout all indoor and outdoor spaces for easy living, allowing the creek setting and landscaping to be felt from the interior. The new program included an ADU and pool pavilion sited to create a sense of subtle enclosure to the pool area.
The structure was only a few months into the construction phase when the mudslide wiped out just under half of the structure. The project rose out of the mud with a greater respect for nature and an emphasis on landforms to help protect the property from similar events in the future. 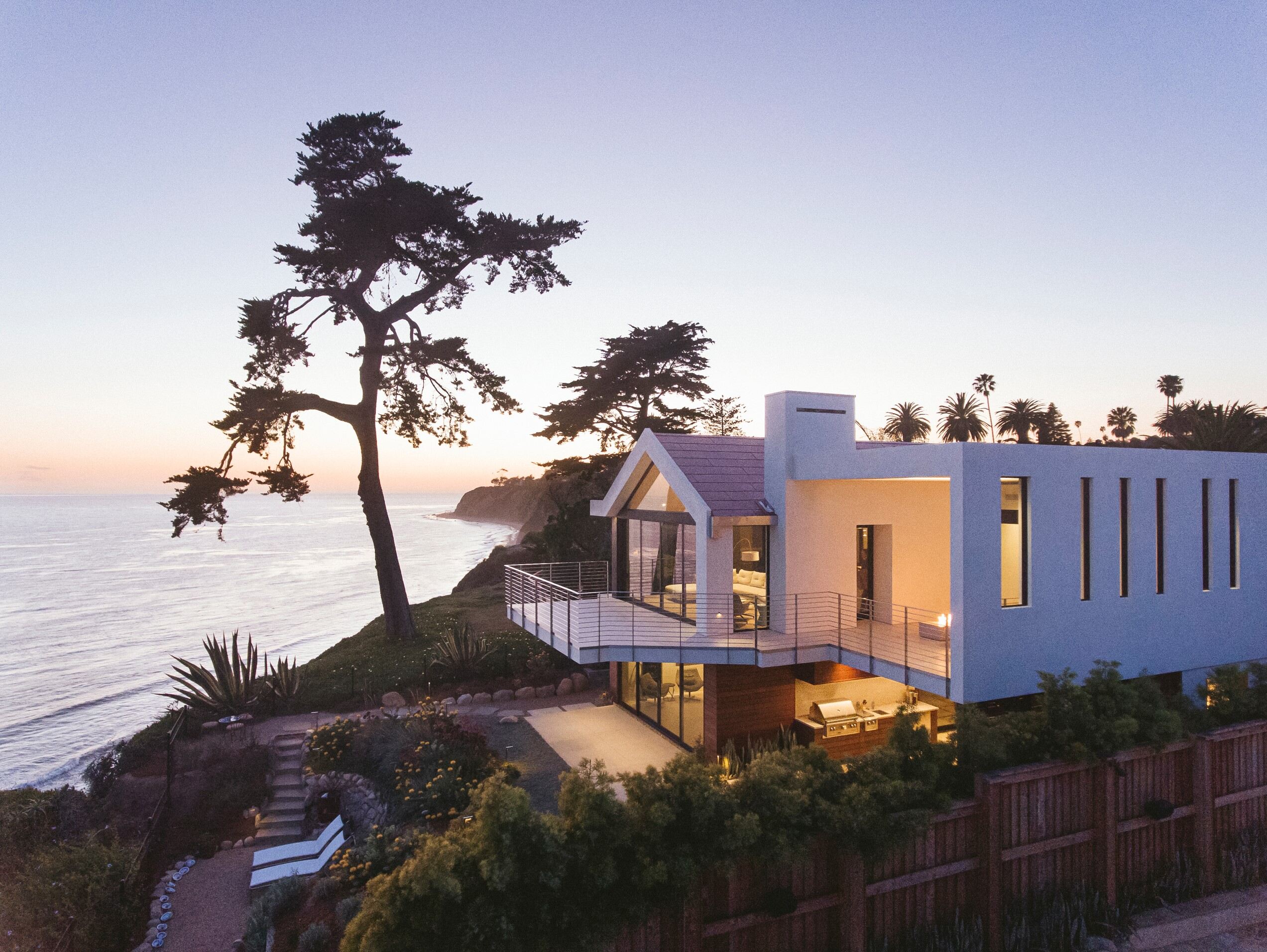 Edge House
Architect: Winick Architects, Inc..
Photographer: Erin Feinblatt
The Edge House enjoys a vast Pacific Ocean panoramic setting blending the magnificent cliff with a modern/vernacular sculptural expression enhanced by the kinetic play of light, shade and projected shadow. The project brief was a graceful generous invitation from the clients requesting a beach home that would not only be a relaxing retreat but an intentional work of art. Equally important in the description was for the house to sit atop the face of the shear cliff with deference to its the natural beauty. 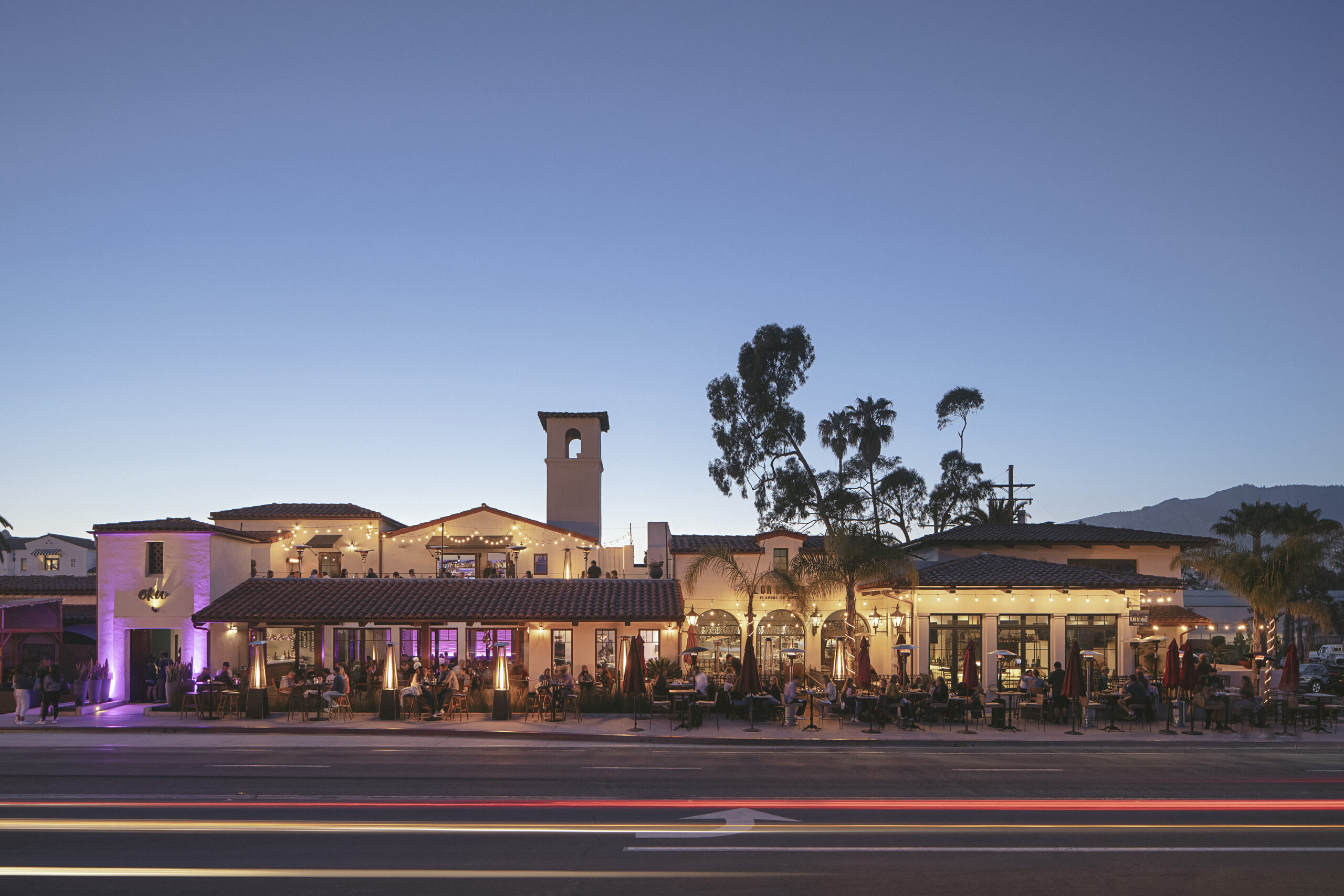 Cabrillo Commercial Complex
Architect: DMHA Architecture + Interior Design, in association with Henry Lenny Design
Photographer: Erin Feinblatt
Bringing new life to the beachfront gateway of Santa Barbara, the Cabrillo Commercial Complex project transformed and revitalized a neglected existing structure on a prominent Cabrillo waterfront site. Home to an aging restaurant for 30 years, the Cabrillo Commercial Complex renovation project involved breathing new life back into an existing, deteriorating building on a prominent site.
The historic structure that had been hidden beneath the surface was uncovered, while adding improvements to create two new vibrant restaurants with a commanding presence on beachfront Cabrillo Boulevard. Remaining true to the architectural style of downtown Santa Barbara, layering of lighting and natural materials combine to create a dynamic exterior and interior dining experience adjacent to a historic waterfront setting. 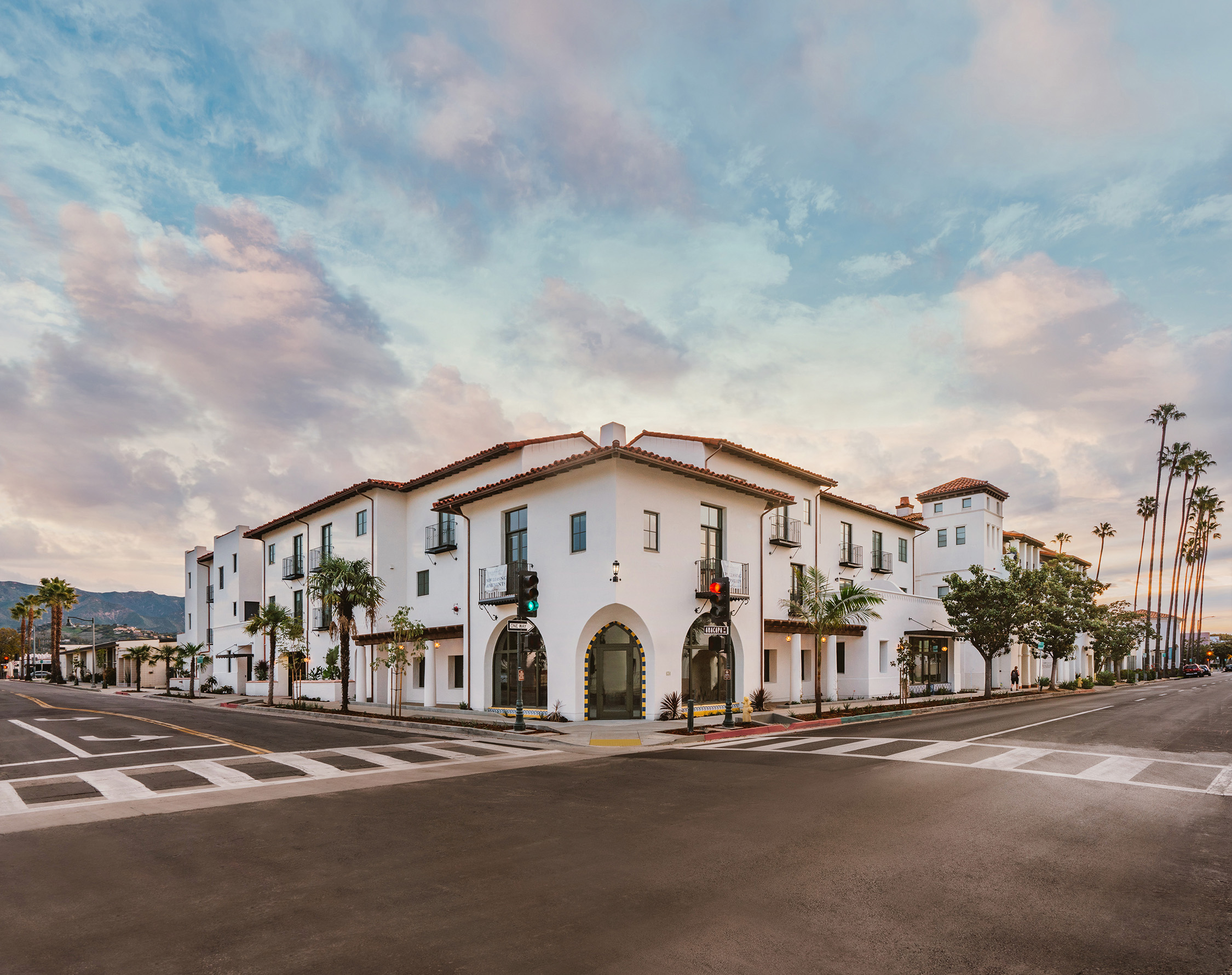 Casa Anatega
Architect: Cearnal Collective, LLP
Photographer: Blake Bronstad
Casa Anatega is a Spanish Colonial Revival style mixed use development located at the corner of Anacapa and Ortega Streets in downtown Santa Barbara. 30 residential units sit above nearly 5,000 square feet of commercial/retail/restaurant space and a 32-space parking garage.
The nearly ½ acre site, categorized as a Priority Housing location under the City of Santa Barbara’s Average Unit-Size Density (AUD) Program which allows for a maximum of 63 units/acre, was a prime opportunity to generate much needed housing. Situated in downtown and only one block from State Street, the dilapidated existing buildings (a single-family residence and several industrial buildings) were a vast underutilization of the site. 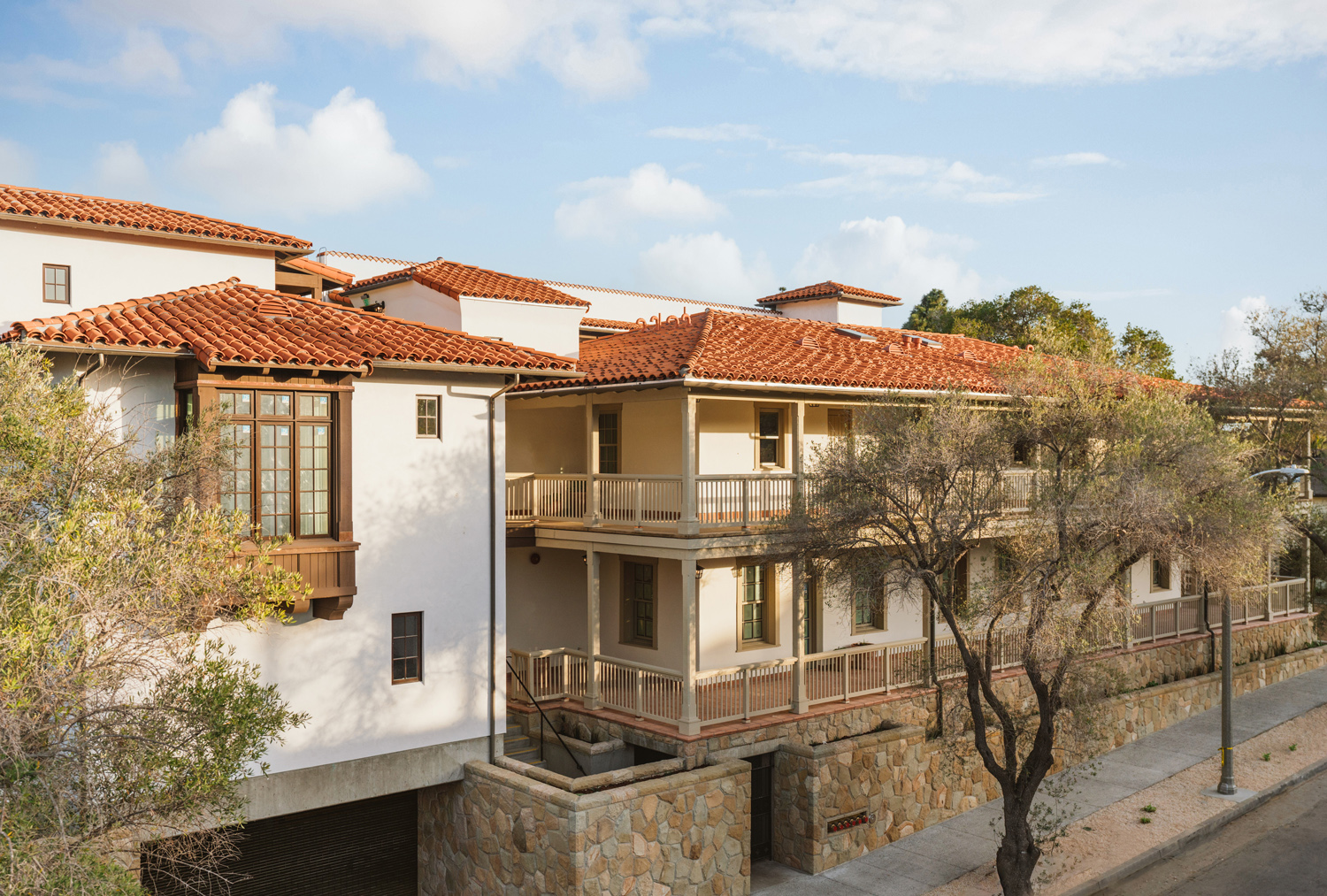 Mayee Plaza
Architect: Cearnal Collective, LLP
Photographer: Blake Bronstad
This mixed-use development is located in the heart of downtown Santa Barbara. The project added 4,800 square feet of commercial space, now home to the Radius Group’s new offices, and 26 efficiency housing units under the City of Santa Barbara’s Average Unit-Size Density (AUD) Program.
The building is comprised of a central two-story Monterey style building ensconced on the surrounding sides by three-story Spanish Colonial style apartment housing. Beneath it all is a partially- subterranean parking garage that features automated parking lifts in order to provide maximum parking in the minimum amount of space. This unique footprint was driven by two key existing assets on the site – the 1875 historic “Ygnacio House”, a recent City of Santa Barbara Landmark that was home to the last speaker of the Barbareño Chumash language, and a glorious oak tree that now shades the common outdoor living space. 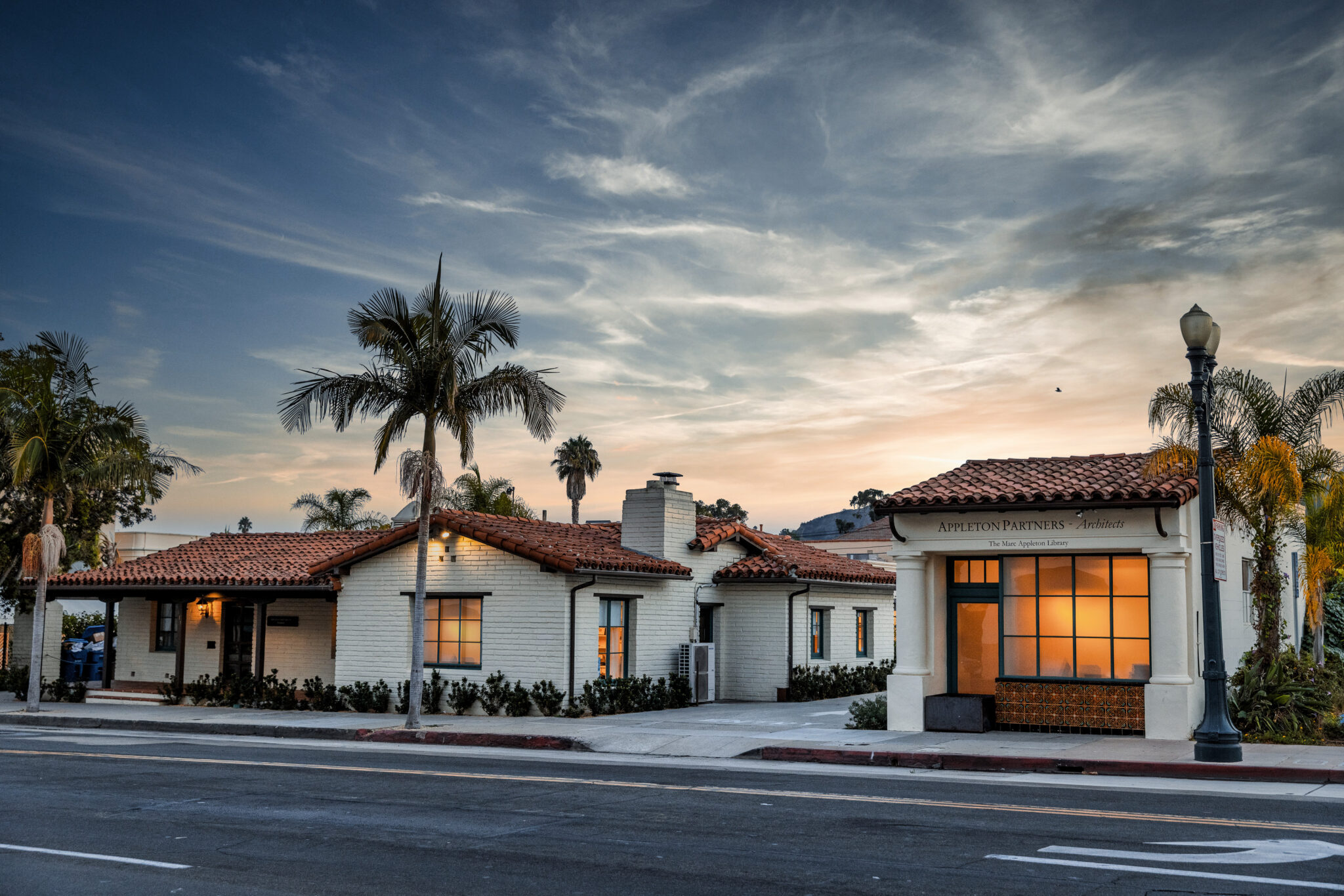 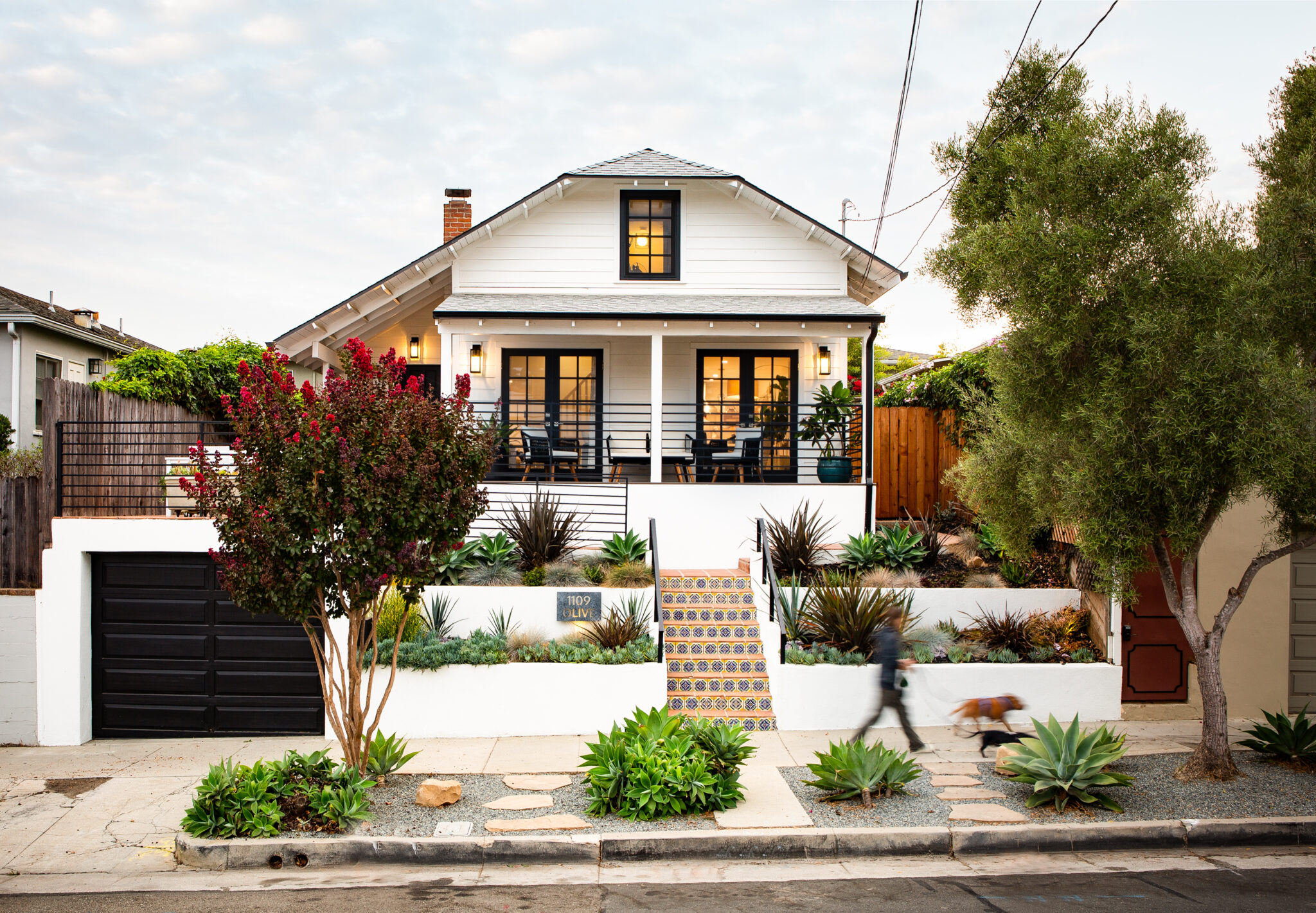 Modern Farmhouse Renovation
Architect: Bildsten Architecture and Planning
Photographer: Jason Rick
An adventurous couple bought this historic house on Olive Street which was in need of significant repair and improvement. No new square footage was added to the house but portions were rearranged and simplified to meet their preferences for a more open floor plan and stronger connections to the outdoors. The most significant interior change was the kitchen, which moved from a disconnected rear location in the house to the area adjacent to the living spaces for a more integrated plan. There were mechanical, electrical, plumbing and structural helical pier foundation upgrades throughout the house. Other renovation areas include the primary bedroom, bath, closet and laundry area while additional storage was created in under-utilized closets and under the stairs.