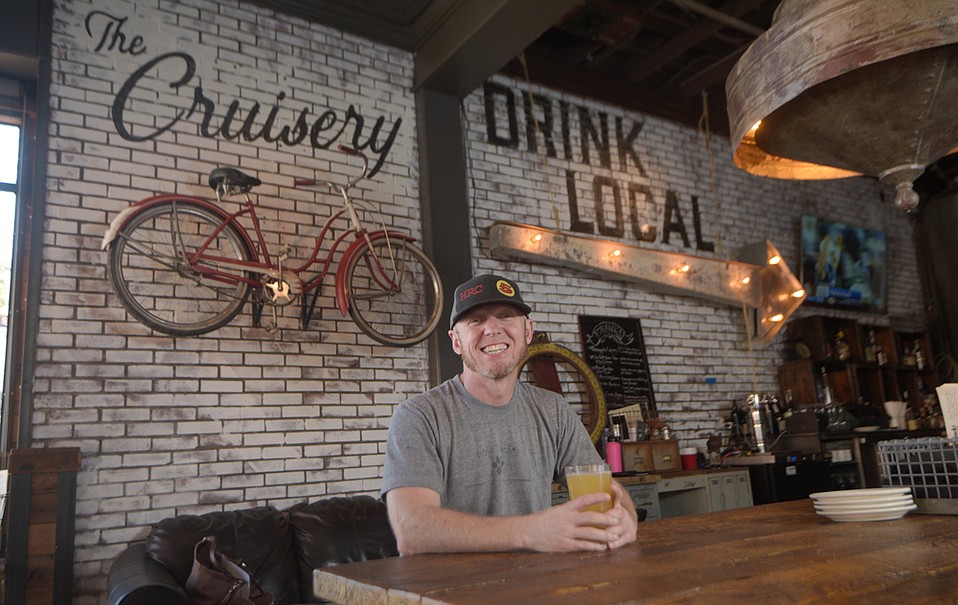 Upon entering the building at the corner of State and Haley, I’m ushered back 23 years in time when the perfect storm —Santa Barbara Brewing Company opening just as I’d turned 21 years old — enabled me to drink the freshest beer possible from my first-ever microbrewery. For perhaps obvious reasons, I don’t have any recollection of what I drank — it was so long ago! — but I knew it was special.

That was in 1995, when the country was home to about 800 breweries. Today, according to the California Brewers Association, there are some 900 craft breweries in California alone. Over the years, that made BrewCo., as it came to be widely known, a little less special — so much so that BrewCo. is now dead. But long live The Cruisery, which is taking over the iconic space.

BrewCo. owners Wayne and Michelle Trella had a good run. Their brewpub, which means it had a kitchen, opened during America’s second wave of microbreweries. They won awards at the Great American Beer Festival from 2004 to 2006, but then competition stiffened. Their recent hiring of award-winning brewer, Dave “Zambo” Zamborski — formerly of SoCal breweries BJ’s and Karl Strauss as well as San Francisco’s 21st Amendment and Speakeasy Brewing — turned the brewing program around, but apparently not the brewpub’s profitability.

Enter Aron Ashland, the owner of Santa Barbara Wine Therapy a few blocks up State Street. The entrepreneurial oenophile is a confessed beer novice, but Ashland prudently kept Zamborski on to helm the brewing operation. Beyond that, it’s a whole new operation.

For starters, The Cruisery name, suggested Ashland, riffs off of a classic Santa Barbara image: beach cruisers. The name deeply influences the new décor and vibe, with actual cruisers suspended from the ceiling and bike tires and baskets adorning the now cleaner and brighter space.

During the soft opening period that began after Thanksgiving, The Cruisery debuted with seven new beers on tap and four more currently in the fermenters. The premier IPA is called Batch 1 and it’s neither hazy New England style nor dry Bay Area style. It’s a classic, citrusy California IPA, eschewing the nouveau hop varietals in favor of tried-and-true Cascade, Centennial, and Simcoe. Weighing in at a higher alcohol-by-volume (8.6 percent) is California Love, billed as an imperial red ale, yet it’s oaked and features orange peel and pinot grapes (because The Cruisery is in the heart of wine country and Ashland is a wine guy). The rest of the lineup includes the standard array of color-specific beers — a blonde, red, and brown ale — plus a pale ale and Bavarian-style Hefeweizen.

There’s also been a menu overhaul. Gone is the comfort-food pub grub like burgers and fish’n’chips — that’s right, there’s no hamburger on the menu, but I predict that will change. Thanks to the chef team of Katie Stowell and Raul Fernandez, the beer-friendly kitchen has been elevated to include dishes such as banh mi flatbread, yellowtail crudo with avocado and mango, and red wine demi-glazed short ribs as well as salads and sandwiches. No nachos, but yes wings. No fries, but yes IPA-battered green beans.

The changes are well-timed. Come 2019, State Street — which already welcomed Night Lizard Brewing and an outpost of Goleta’s Draughtsmen Aleworks this year — will be home to taprooms from San Diego’s Modern Times and Camarillo’s Industrial Ale, competition that would have further stifled the older BrewCo. format. With plans to offer plenty of bike parking on Haley Street, the development of a full bar, and continual tweaking to the beer and food programs, The Cruisery is looking like it’ll shine brightly.