The January 20th MLK Holiday celebration was the culmination of four days of planned activities created by Martin Luther King, Jr. Committee of Santa Barbara (MLKSB) to celebrate the life of Dr. Martin Luther King, Jr. The schedule included a “Walk with Us” Eternal Flame Ceremony at UCSB Buchanan Courtyard, followed later that evening on January 17th by a worship service at B'nai B'rith featuring choir performances by CBB and The Unitarian Society.

On January 18 MLKSB welcomed the community to participate in “Crossing the Bridge” from the East to West of Santa Barbara City College campus to congregate for an address by Wendy Sims-Moten and enjoy the Plantation Dancers, Ring Shout and Buzzard Lope, drumming. Faith services were enjoyed at a collection of churches and faith organizations recognizing Martin Luther King, Jr. on Sunday, January 19.

The outstanding finale of the four days Martin Luther King, Jr. weekend was the morning gathering at De La Guerro Plaza and the march down State Street to the Arlington Theater. The early program attracted a crowd of supporters who enjoyed the songs, while many joined in for the World Dance for the Humanity performance, including State Senator Hannah-Beth Jackson. E. Onja Brown, President of MLKSB, served as emcee and shared inspiring words with the audience. Poems and essays were read by two winners of the MLKSB sponsored writing competition coordinated by Sojourner Rolle, followed by words of inspiration from a collection of local officials including County Supervisor Das Williams, City Council Members from the Santa Barbara area, County Supervisor Gregg Hart, and an open microphone for people to share their own personal thanks on MLK day. 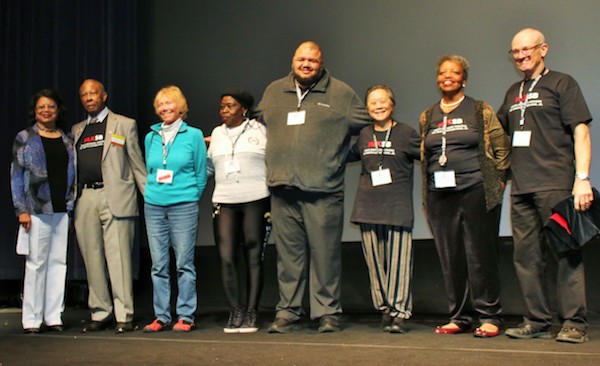 Dr. James M. Lawson, who worked with Dr. King in the planning of the non-violence direction of the late 1950s-1970s, and he mentored the Nashville Student Movement and the Student Nonviolent Coordinating Committee. Dr. Lawson serves on the faculty of both California State University, Northridge and University of California, Los Angeles. More recently he was inducted into the California Hall of Fame for his Life's work advocating for social justice via non-violent action. The ninety-one year old speaker gave one of the most impressive and inspiring talks, filled with hope and encouragement, peppered with direction to be proactive in fighting for truth and equal rights, but always from a place of love. I was very honored to shake the hand of this man and share a few words following his thought provoking talk.

Before leaving the theater to attend a luncheon guests were given a benediction and blessing by Rev. Roderick Murray. It was a fabulous weekend of events presented by Martin Luther King, Jr. Committee of Santa Barbara and a loving tribute to Dr. Martin Luther King, Jr., a great man who gave his life fighting for freedom and equality.