Isaac Alvarado Draws from the Past 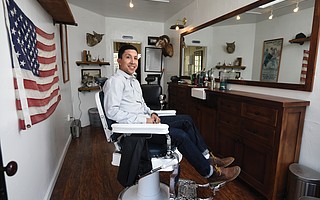 Last fall, when 27-year-old Isaac Alvarado opened his first barbershop, his grandfather, Manny Moreno, passed along a family heirloom — a Koken barber chair that Moreno put to use in the 1960s at the now-closed Valley Barbers in Old Town Goleta. Koken chairs were revolutionary when they debuted in 1891; they were the first to hydraulically move up and down. Before that, chairs spun on a threaded rod, and barbers would turn them one way to elevate their customers and the other way to lower them. Welcoming customers with a clean, vintage look, Alvarado had his grandfather’s chair rechromed and reupholstered before opening day. “It looks brand-new again,” Alvarado said. “Just like an old car.”

Along with that chair, Alvarado inherited an aptitude for shears and style. His mother, too, was cutting and styling at Shear Image Hair Design in the Magnolia Shopping Center, where Alvarado would walk every day and hang out after school at San Marcos High. That’s where he got his start — probably without even knowing it at the time — just soaking up technique and aesthetic as kids tend to do. (His mom now works at E Salon, also in Goleta.)

Eventually, Alvarado set out on his own, enrolling at Lu Ross Academy in Ventura, where he studied during the day before cutting hair each afternoon and evening at Top Hat Barber & Beauty Shop in Oxnard. Earning his certificate three years ago, he headed back to Santa Barbara, cutting at Magnolia Barbershop near his mom’s salon and concurrently at Wolf’s Head, located downtown on State Street. He did that seven days a week for eight months straight, he said, before shifting to Wolf’s Head full-time. Then the opportunity presented itself to open his own place. “I jumped on it,” he remembers. “It just happened — it just manifested — because I was working so hard. That’s the way I look at it.”

It didn’t hurt, either, that the landlord of the Wolf’s Head building had just purchased the Victoria Street spot and was looking for another barber to fill the 190-square-foot space vacated by longtime tenant Members Only Barber Shop, which has since relocated. Along with his own décor, Alvarado added a second chair, a fully restored Theo A. Kochs from the 1920s. “Lots of shops are going for that old-school theme,” he said. “These chairs are getting hard to find.”