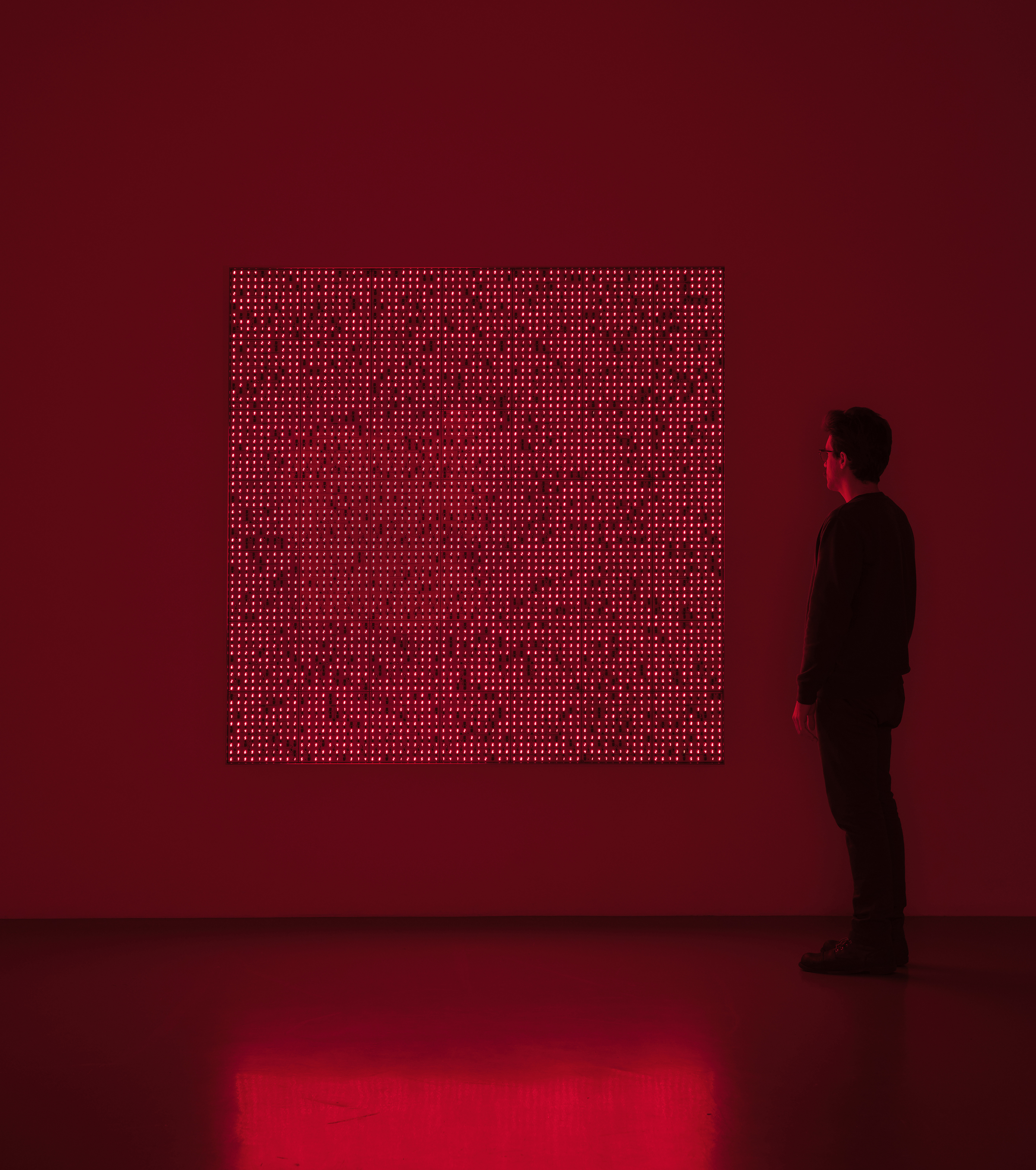 Entering this new immersive exhibition at the Santa Barbara Museum of Art, one experiences an unmistakable sensation of mastery, although not of a typical sort. Tatsuo Miyajima has been creating his distinctive installations for several decades now, and he has arrived at a striking level of expressiveness and concentration through variations on a single process. Miyajima arranges LED displays of the digits 1-9 in various formations and then sets these “counters” to cycle at different rates. On their own, Miyajima’s counters are as familiar and neutral in meaning as the numbers on any digital clock, but when organized and programmed according to the imagination of the artist, they become potent expressions of a profound personal philosophy. Miyajima articulates his system of belief, which derives from a lifetime of Buddhist practice, through three basic precepts: “Keep changing. Connect with everything. Continue forever.”

The four pieces now on view at SBMA include two large grids of these counters in red, and two more in which the numbers appear more randomly within a dark rectangular screen. Each work occupies its own discrete room, and viewers are encouraged to move around and experience them all from different angles.

The earliest of the works in this show, “Counter Ground,” from 1998-2000, is also the largest — a square on the floor measuring 19.5′ x 19.5′. “Counter Ground” was commissioned by the Dallas Museum of Art, and it reflects both Miyajima’s experience of the North Texas landscape at night and his understanding of the way underground energy flows make modern urban living possible. Spending time with “Counter Ground” reveals the care with which it was composed. As in a great painting, the surface has no dead spots. It is continually alive to eye, its counters blinking, blacking out, and stabilizing in unpredictable patterns that resist the mind’s attempts to discover some dominant underlying routine.

“Innumerable Life / Buddha MMMMCM-01” (2018), in the next room, repeats the red LEDs and the grid format, but this time in a tighter configuration and mounted on the wall. This is the show’s most iconic and Instagram-friendly piece. As an avatar of the artist’s overall practice, it has no peer. Its square shape, constant transformation, and human scale render it absorbing at every distance, from across the room to close up. Miyajima’s use of numbers offers him the opportunity to embrace seemingly incompatible aesthetic advantages simultaneously. There’s tight focus in terms of both medium and content, but there’s also the universality of a vocabulary that effortlessly transcends language barriers.

The other two works render these integers in less disciplined geometric relations. “Life (Ku-Wall) No. 1” (2014) is a rectangular flat screen hanging in landscape orientation. The Buddhist concept of ku, translated variously as latency, non-substantiality, emptiness, and void, gives Miyajima an alternative to the Western “zero,” a concept and digital representation that he scrupulously avoids in his work. Like ku the concept, the “Ku-Wall” delivers a sense that anything can happen. Unbounded by the grids of installed counters, these digits arise and vanish on the screen as if from thin air.

“Time Waterfall – panel #12” (2018) is a flat screen in the opposite orientation — vertical rather than horizontal — but much too elongated to be captured by the shorthand of “portrait.” In this work, Miyajima explores the theme of declining energy by programming the numerals to “fall” through the space defined by the screen as they continue to count. “Time Waterfall” gives the show its most playful moment, as the movement of the numbers mimics gravity in a way that nevertheless underscores their fleeting nature and lack of substance. Miyajima is a major artist with something very timely to say, and he says it with admirable concision. The show, like the Buddhist practice that underpins it, invites both distanced contemplation and sensual apprehension.