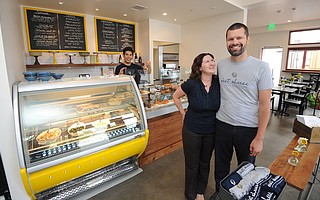 Kathryn and Michael Graham opened their expanded C'est Cheese store and cafe in 2014.

Though the property-destroying dangers of the Thomas Fire appear to be passing, the wildfire’s damage to Santa Barbara’s restaurant and retail sectors don’t show signs of abating quite yet. This week, C’est Cheese, the popular fromagerie on Santa Barbara Street, was forced to close its usually popular cafe due to lack of business caused by the fire’s smoke, ash, and evacuations.

“We are heartbroken to announce that we have had to close down our café for the time being,” said a letter from owners Michael and Kathryn Graham to customers, noting that their retail and catering departments remain open. “Between the evacuations and the unrelenting smoke, our customers have, very understandably, not been in the mood for shopping, particularly for indulgences such as fancy cheeses or gourmet cheese platters and gift boxes. This has all happened at the very worst time when retail businesses rely on extra sales in order to survive the leaner months at the beginning of the year (and frequently the rest of the months too).”

Following last Saturday’s flare-up, the Grahams realized that they were spending deep into their reserves, and were forced to “make some painful decisions in order to allow us to stay open.” They decided to scale back by closing the cafe for now, which included laying off 15 employees. “That was by far the most difficult part of this,” said Michael in an email to The Independent on Thursday morning. “They are all such wonderful and talented people that we had to let go and didn’t deserve this at all.”

The letter also explained that they are working closely with their landlord and bank, both of which are supportive. “We’re going to get there,” they wrote, expressing thanks for the support that’s starting to return as the smoke clears.

Already this week, business is on an uptick, so there is hope that the café will return in the future. “As far as timing, we’re not sure right now what exactly we’re going to do,” said Michael. “It’s such a crazy day-by-day month. This week we’ve seen business come back, but I think we need to get to the end of the month and then evaluate where we’re at in order to figure out the best path forward.”

Concluding their letter, the Grahams also asked the community to support other businesses. “[We] are not just writing this for ourselves, but also for our local business community-at- large,” the letter explained. “At the end of the day, these are businesses. We are not asking for charity or donations, there are plenty of people and causes who deserve that more. Our big ask is that, in the weeks and months ahead, to please just give consideration to where you spend your hard-earned money … . If you like a place and want it to stick around, please stop in from time to time to let ‘em know.”